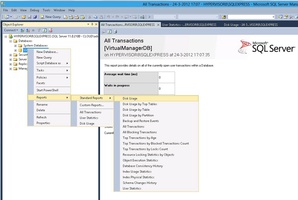 Advertisement
Microsoft SQL Server is the database management system from Microsoft, an alternative to other, well-known management tools such as Oracle.

Its language is based on SQL, and even though there are several commercial versions, the Express line can be downloaded for free with small limitations, such as only using one processor, 1GB of memory and database files that are below 10GB.

SQL server includes several common features, such as the possibility of working remotely in client-server mode with different administration ranks. You can also integrate projects with Microsoft Access and the VBA Access development environment, also from Microsoft.

Apart from offering a complete help and documentation system, it also incorporates a powerful administration graphic environment for DDL and DML searches, as well as an access interface for the main development platforms, including .NET.
Reviewed by Álvaro Toledo Translated by Stanislav Sousek